Since 1987, the Manchester Craftsmen’s Guild has been bringing many high caliber jazz performers to the Pittsburgh area to perform live, in front of enthusiastic audiences. Those who have graced the stage at Manchester Hall have included McCoy Tyner, Shirley Horne and Dave McKenna, to name just a very few.

For this concert, the Guild has surpassed itself by combining the stylish soothing saxophone and clarinet of one of the most sought after jazz performers in the U.S., Paquito D’Rivera with the imaginative and innovative New York Voices. Together they present a program which focuses in on one of the most lyrical and melodic forms of jazz music, Brazilian. This could have easily turned out to be a program of music of Antonio Carlos Jobim (although he is well represented naturally) and everybody would have been happy. But to their credit, the producers and performers have spread the wealth a bit by adding some D’Rivera originals, music by Luis Bonfa as well contemporaries Joao Donato and Claudio Roditi. The result is a balanced program which does a couple of things.

First, it reminds us there is considerable variety in the music emanating from that big country South of the Border. Second, it highlights the skill of D’Rivera as a clarinetist. He gets a pure, clear tone and flawless, understanding legato from the long stick which is especially effective on such cuts as “Corcovado”—this track is enhanced by the lovely vocalizing of Lauren Kinhan—as well as on “Modinha” and the medley of “Manha de Carnival”/”Gentle Rain.” And “gentle” is the operative word.

The New York Voices manage to sing in a moderated manner avoiding the manic comings and goings too often found with singing groups. There is no false or strained efforts to explore unconventional and discordant harmonies. Things do liven up with “Corcovado,” with the Voices doing some intelligent scatting over D’Rivera’s clarinet. But matters never get out of hand. This is a choice 53 minutes of music and is recommended without reservation.

(Review by Dave Nathan from All About Jazz) 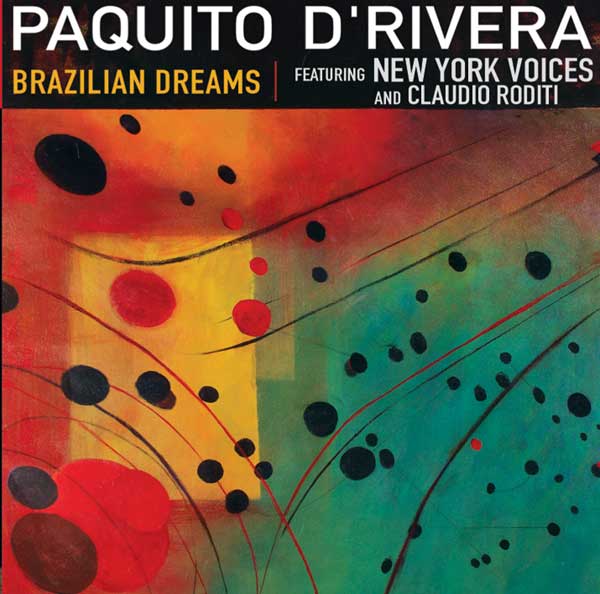