We’re happy that the New York Voices Vocal Jazz Camp has been featured in the press multiple times. 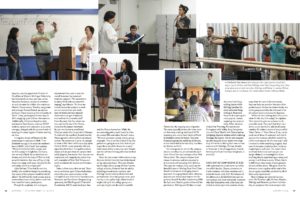 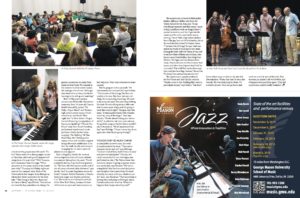 Rob Lawrence has a long career in choral music. He directs the choir and jazz singers at the University of Central Missouri, and has led clinics for other singers.This week, though, he’s a student. He and about 70 other singers as young as 14, others 30-year teaching veterans from 12 states and seven foreign countries, including South Africa and Japan attending a music camp taught by the internationally celebrated New York Voices at Bowling Green State University. As a student he did something he’d never done before … sang a jazz solo with rhythm section. He was “pushing my comfort level,” he said. The faculty at the camp, he said, made that easier. “They are very accessible and very personal. It’s been a great week.” Since Tuesday, the Voices – Peter Eldridge, Lauren Kinhan, Darmon Meader and Kim Nazarian along with Greg Jasperse, of the California group Sixth Wave – have been coaching the singers in solo and ensemble vocal technique, songwriting, arranging, improvisation and even making drum sounds with the voice – “what you don’t get at conservatory,” Lawrence said.

The sounds of jazz will fill Moore Musical Arts Center Aug. 4-9, when professional and amateur singers will gather for a special “camp” with New York Voices, the internationally celebrated jazz vocal quartet. Highlighting the week will be an 8 p.m. concert Aug. 8 in Bryan Recital Hall. The public concert will include selections from New York Voices’ most recent album, “A Day Like This,” and the group’s 21-year career, while also drawing from Brazilian, rhythm and blues, classical and pop music.

The 2009 Bowling Green State University’s (BGSU) Vocal Jazz Camp features instruction from members of the premier vocal jazz quartet New York Voices, and in recognition of the unique opportunity the camp provides for serious students of vocal jazz, Sennheiser and Neumann will support the camp by providing a scholarship and live microphones both for use during the camp, as well as for prizes. Applications for the scholarship can be found at www.BGSUjazz.com and awards will be determined based on need and talent. Deadline is June 15. New York Voices have been at the forefront of vocal jazz for over 20 years, with their performances and recordings having performed on a Grammy winning project by The Count Basie Orchestra and a Latin Grammy winning project by Paquito D’Rivera, in addition to numerous other awards and accolades.

New York Voices, a Grammy Award-winning jazz vocal quartet, will be the guest artists teaching at Bowling Green State University’s jazz camp, which begins Tuesday. The camp is fully enrolled, but several concerts will be open to the public, including the finale, featuring New York Voices, at 8 p.m. Aug. 8 in Bryan Recital Hall of the Moore Musical Arts Center. Tickets are $15 at the door and may be reserved by e-mailing . The members of New York Voices – Peter Eldridge, Lauren Kinhan, Darmon Meader, and Kim Nazarian – will present individual concerts at 8 p.m. Tuesday through Aug. 7 in Bryan. They will be joined by camp participants and faculty members, including guitarist Chris Buzzelli, bassist Jeff Halsey, and percussionist Roger Schupp.