At first listen, the New York Voices may bring to mind another two-man, two-woman quartet: The Manhattan Transfer. Both groups harmonize beautifully, and their members take turns as lead vocalist. However, the Transfer is known mostly for vocalization—adding lyrics to previously recorded instrumental songs. New York Voices also do that, but the group covers more songs that originally had lyrics, and its members write more original music. Their first solo release since 1997, A Day Like This earned a Grammy nomination, familiar territory for a group that already has a Grammy Award in the bag.

New York Voices debuted in 1987 with five members, three of whom remain: Darmon Meador, Peter Eldridge and Kim Nazarian. In addition to vocals, Meador plays tenor saxophone, and Eldridge plays piano. The group underwent some personnel changes, and in 1992, Lauren Kinhan became part of the ensemble. The foursome shares writing duties, with both arrangements and original lyrics.

On A Day Like This, the group demonstrates some of its versatility. “The World Keeps You Waiting, written by Eldridge and Kinhan, has a Brazilian flavor, influenced both by Ivan Lins and Chick Corea. Kinhan performs lead vocal, as the group sings of how attitudes about the world’s values change as people get older. Meador plays tenor sax on this one, with Eldridge on piano. Marcello Pellitteri on drums and Jay Ashby on percussion help punctuate this track’s South American feel.

The group swings with Burton Lane/Alan Jay Lerner’s “On a Clear Day. Meador injects a scat solo and plays the tenor, while a small horn ensemble assists. During the solo, the other voices come in first to complement Meador, then harmonizing on the scat, which seamlessly glides back into the lyrics.

Another original song, “Chamego (Betty’s Bossa), features Paquito D’Rivera on clarinet. Penned by Eldridge and friend Jack Donahue, this songs shows the group in a wordless chant, emulating one of the styles of Brazilian composer Antonio Carlos Jobim.

Kinhan leads on the charming cover of Stevie Wonder’s Latinesque “Don’t You Worry ‘Bout a Thing. This is one of three tracks that include a large horn section. The arrangement is largely faithful to the original, but is given a powerful injection of big band jazz by the horns, supplemented with an appearance by Chuck Loeb on guitar.

New York Voices is one of the finest vocal presences in today’s jazz, a thought strongly supported by A Day Like This.

(Review by Woodrow Wilkins from All About Jazz) 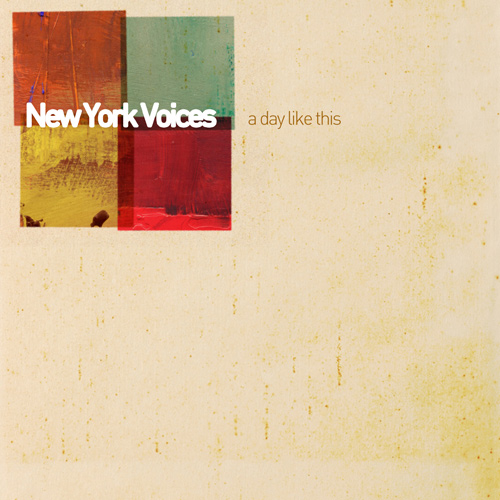